Christmas Reads – Our favorite books for the Holiday Season! 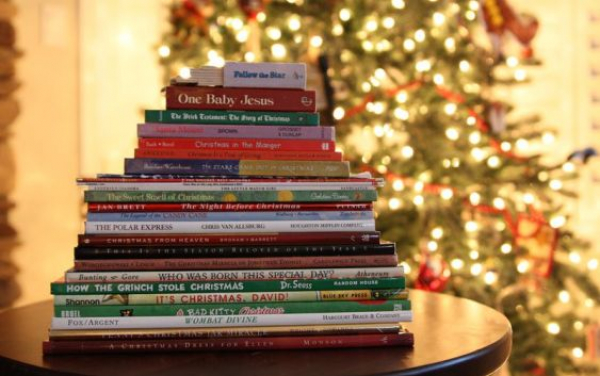 Warm your hearts with these holiday stories, from old classics to new delights. These books for kids ages 0-9 are about generosity, love, and friendship, and are perfect for the season, no matter what traditions you celebrate!

Ebeneezer Scrooge’s literary villainy may not rank as highly as the likes of Patrick American Psycho Bateman or Clockwork Orange‘s Alex but remember – this is a man who actively despises Christmas! Luckily, a timely visit from the ghosts of past, present and future forces Scrooge to confront his more challenging personality traits in time for the festivities.

The Lion, the Witch and the Wardrobe

The Lion, The Witch And The Wardrobe

“’It’s a magic wardrobe. There’s a wood inside it, and it’s snowing! Come and see,’ begged Lucy.”

Don’t worry, Grandma hasn’t left the Christmas port out, Lucy’s only gone and found a portal to the mythical land of Narnia in the spare bedroom.

A Visit from St.Nicholas

A Visit From St. Nicholas

“Twas the night before Christmas, when all through the house, Not a creature was stirring, not even a mouse”

Young Billy’s family doesn’t believe in Santa and now even Billy is having his doubts. Luckily, a mysterious fun train arrives on Christmas Eve to take him to the North Pole to meet the big man himself. Tickets not available on the National Rail website.

How the Grinch Stole Christmas!

How The Grinch Stole Christmas!

Grinch, whose heart is two sizes too small, steals everyone’s gifts because he hates Christmas. But Christmas is not about what’s under the tree, it’s about what’s in our hearts, according to Dr. Seuss. Come December 25, the Grinch sees everyone is still filled with festive joy and he returns the festive booty, resulting in his heart growing three times larger. Sounds painful.

If you think the snowman in the John Lewis advert is impressive, wait until you get a load of this guy. And like the ad, it’s all pictures, no words.

The Gift of the Magi

The Gift Of The Magi

It’s Christmas Eve and the only decent way a broke Della can raise cash to buy her husband Jim a gift is to chop off and sell her L’Oreal-worthy locks. Freshly shorn, she splashes out on a fancy watch chain, only to find an equally cash-strapped Jim has flogged his timepiece to buy her a set of combs. The morals being; don’t sell a body part to buy a Christmas gift and always keep the receipt.

A Child’s Christmas In Wales

A Child’s Christmas In Wales

Childhood And Christmas Day In A Small Welsh Town, As Based On Dylan Thomas’ Own Experiences. Not Sure What The Kids Of Today Would Make Of It Mind. No TV? No PSPs? What Did People Do For Fun?

Faced with going home for a beating or staying out on a freezing cold New Year’s Eve to sell matches, the Little Match Girl lights her stock to keep warm and experiences wonderful visions of her late grandmother, the only person who ever showed her love. Terribly sad, terribly good.

The Ecco Book Of Christmas Stories

The Ecco Book Of Christmas Stories

Like a literary version of Now That’s What I Call Music!, this book comprises 23 Christmas stories by a random selection of acclaimed authors.

Six-year-old Eloise loves the festive season so much she scrawls ‘Merry Christmas’ all over the walls of the New York Plaza Hotel. She’s not yet bought into the idea that Santa only visits good children, but she does narrate in cheeky festive rhyme.

by Louisa May Alcott

“Christmas won’t be Christmas without any presents,” grumbled Jo, lying on the rug.
Quite.

Christmas In The Big Woods

Christmas In The Big Woods

Little House on the Prairie does Christmas. For small children. More baking cookies and playing in the snow than going to Starbucks and wandering around Westfield.

“Snow was falling gently on the streets, and people were hurrying home, their arms filled with gaily wrapped boxes and paper parcels from toy stores, candy shops and bakeries”. So begins the story of The Nutcracker, and with it the dreams of thousands of ballerinas.

When Santa Fell To Earth

When Santa Fell To Earth

by Comelia Funke and Paul Howard

Santa’s had better days. Twinklestar the reindeer has slipped the reins and the sleigh’s crash landed. Good job local children Charlotte and Ben are around to help stop Yule Land’s marauding gang of motor sledgers from ruining Christmas.

The Best Christmas Pageant Ever

The Best Christmas Pageant Ever

They also want to play all the main characters in the community Christmas Pageant. Wholesome American fare from 1972, but don’t let that put you off.

The Tailor Of Gloucester

The Tailor Of Gloucester

First published in 1903, this book tells the story of the poor tailor of Gloucester, too tired and ill to finish off the Mayor’s Christmas wedding outfit. Good job there’s a mischief of mice around to help out. Now you know where the idea for Bagpuss came from.

The Donkey In The Living Room

The Donkey in the Living Room

A topseller, this new US kids book is for parents who want to introduce a Christian theme to the festivities. It’s inspired by the author’s family tradition of unwrapping individual figurines from a Nativity scene in the days leading up to Christmas. And it’s got rhymes.

And if you want a new Christmas release for kids that skips religion, but still has rhymes, try the story of a lost toymaker called Belstarr. She holds the key to Christmas in her heart, but faces a battle with a ghastly beast called Drake Hausen, who has a plan to take over Christmas as his own.

The Box Of Delights

The Box Of Delights

Written in the 1930s by the then Poet Laureate, it’s fair to say this one’s a tad surreal. To summarise: boy hero heading home for Christmas; magic box; gang of crooks threatening to cancel Christmas; ancient greeks; bumbling policemen; pirates; good versus evil; snowy England. They made a TV version in the 80s. Apparently.

Here are some books about Hanukkah, Kwanzaa and other celebrations:

The Rabbit Hole Bookstore - Where children discover the magic of books! The Rabbit Hole Bookstore is a passionate initiative to bring the world of literature and books close to our children. We are an independent children’s bookstore with children at the heart of everything we do. Created specifically to bond the child and the book and to allow children to encounter books in new and exciting ways, The Rabbit Hole brings with it specially curated children's books and other products that nurture creativity and a host of other skills and let the children explore the horizons of imagination and provide an opportunity to find their inner connection with the world of literature. Explore books and beyond at The Rabbit Hole!

Make sure you enter all the required information, indicated by an asterisk (*). HTML code is not allowed.

More in this category: